skip to main | skip to sidebar

Wandering Through the Days

It's been about a month since I last posted. I don't know what to say about that month. It's been full of tears and sadness. I've not yet reached that point that I am grateful for the time that I have had with my Aunt B. Although to be sure, I am. But I am still dwelling on the fact that we are about to lose her.

Aunt B is the oldest of the four sisters in my mom's family, and the second oldest of five siblings. She is the one aunt who remained in Newfoundland. My other two aunts moved to the mainland.

She was married; however her husband passed away in the 1980s (I can't recall right now if it was 1982 or 1984... something tells me it was 1982). Her husband had diabetes and I believe died of diabetes-related complications. They had no children, and thereafter, Aunt B pretty much became my second mom. She has always been there.

Aunt B spent many years as a seamstress, toiling over intricate details in so many sewing projects for our family. She showed me the basics of sewing; thanks to her I tackled making my own pyjama pants! I made about five or six different pairs with her help; I wear them sooo often! When I couldn't find a particular nightgown (in a material I was looking for), she took measurements and made me three of them! She sewed a beautiful (Eskimo style) coat for me when I was a young girl. When I was graduating from high school, she made my date's cummerbund and tie from scratch when we couldn't find the colours we wanted in the rental cummerbunds and ties. When I got married, she took apart my wedding dress and took it in as needed, so that it fit me like a glove. In fact, she made my sister's wedding dress from a pattern; it turned out so beautifully! Everyone admired it.

Aunt B did a Pooh Bear baby quilt for Petite before Petite was even born, and after Petite arrived, she made sure to lavish her skills on my little girl. One of the last things she sewed for Petite was an old-fashioned apron, modelled after the one my grandmother used to wear years ago. 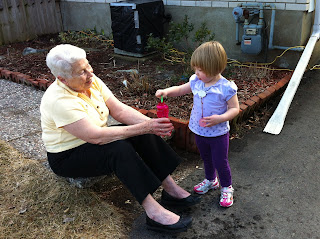 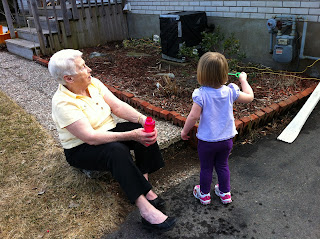 And then one month ago, she lost the use of her hands and legs. She has been pretty much bedridden since then, after falling and being unable to get up herself. She has been hospitalized. And we finally know the details.

Colon cancer. Aggressive colon cancer. Which has metastasized in her adrenal glands, lungs, and thyroid, disintegrating the third vertebrae and doing enough damage to the spinal cord that her arms and legs are not very responsive. Surgery isn't really an option; there's no blockage so chemo or radiation might take care of it. However, she is pretty determined not to have treatment at this point in her life. There is the possibility of just giving her enough treatment to make her comfortable and let this run its course... if that is what she wants.

She is still of sound mind, and if that is her decision, we must abide by it. I do not have to like it, but I will wholeheartedly support her choices.

She said to one of the nurses today, "I guess I won't be making Petite any more dresses, will I?" Hearing that cuts deep into my heart. I ache for her. For Petite. For the idea that Petite will not remember her.

The two photos above are the last two that I took of her and Petite together when she was visiting in March this year. I may not get the opportunity to take any more; my "Photo a Day for a Year" project has given me these at least. Last year for Aunt B's birthday in November, I compiled a photo book for her. In it were over 50 photos of her and Petite. My daughter's picture was never far from Aunt B; she would even pull it out at the hairdresser's to show off Petite to anyone who would stop to admire her!

We are trying to get organized to fly down to see her, and say our goodbyes as it seems that her time is growing short. I can only hope we make it in time. So every time I speak with her, I make sure that I tell her that I love her and yes, I will be sure to kiss Petite for her. Every single day.

Cape Spear, Newfoundland, August 7, 2004 (lighthouse in the background); Contact me at Jiliana2 (at) gmail (dot) com

Gil and Hubby are...

Get your infertility ribbon

Thanks to Whitney and Erick

The Best of the Adoption/Loss/Infertility Blogs of 2010 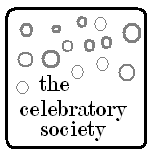 Tell me how my blog has helped, changed or affected you.

Been There, Done That; what we've tried since 2003